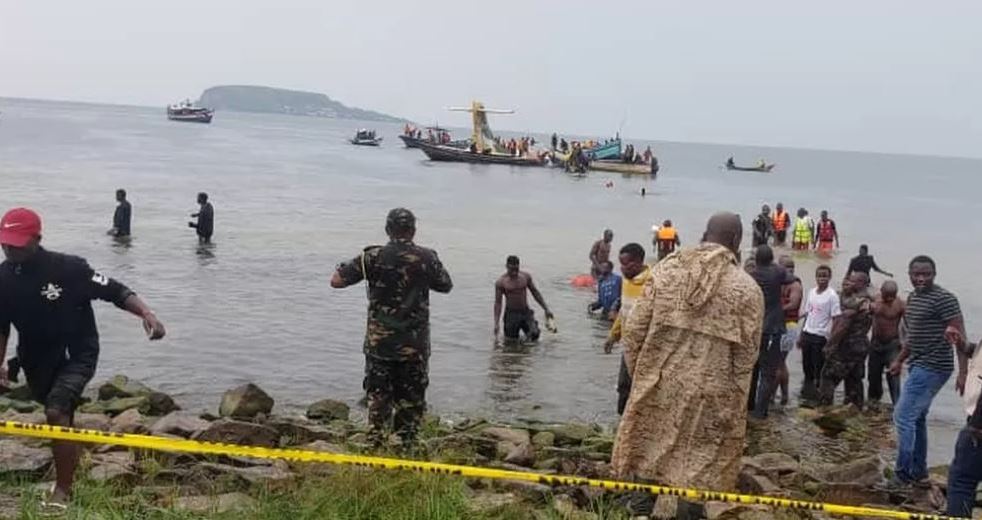 The tail fin can be seen in the water, surrounded by boats and rescue workers [Photo: CHARLES MWEBEYA TBC]

A Tanzanian passenger plane has crushed into Lake Victoria as it attempted to land in the lakeside town of Bukoba, killing at least three people.

The Precision Air flight was carrying 43 people, 26 of whom have been rescued and sent to hospital, an official said.

Rescue workers and local fishermen are on the scene searching for survivors.

The plane is almost completely submerged with only the brown and green tail fin above the water, surrounded by rescue workers and fishing boats.

One end of the runway at Bukoba airport lies right next to the shore.

Top regional official Albert Chalamila said that three bodies had been recovered so far following the crash, which has been blamed on bad weather.

Emergency workers are using ropes to try and pull the ATR-42 aircraft out of Lake Victoria, Africa’s largest lake.

“We want to see if the landing gear is stuck so that we can ask for more technical assistance to push it out of the waters,” said Mr Chalamila.

The two pilots and two crew have not yet been found.

President Samia Suluhu Hassan has expressed her condolences to those affected and called for calm as the rescue operation continues.

The plane was flying from Tanzania’s biggest city, Das es Salaam, to Bukoba via Mwanza.

Precision Air is Tanzania’s largest private airline and is partly owned by Kenya Airways. It was founded in 1993 and operates domestic and regional flights. 8 hours ago
Check Also
Close
Featured Posts
We only approved policy principle of 2023 Budget; not the taxes – Minority
4 mins ago

NDC election: We want a team that will lead us to 2024 victory
5 mins ago