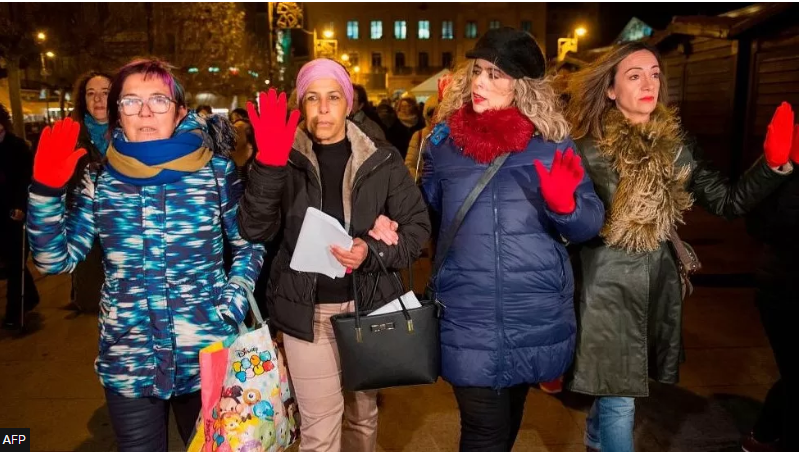 A row has erupted in Spain after it emerged a landmark law to toughen penalties for sex crimes is being used by lawyers to reduce clients’ existing sentences.

The “only yes means yes” law was prompted by the notorious 2016 Manada or “wolf pack” case, when five men raped an 18-year-old woman in Pamplona.

But, according to Spanish media, at least four sex offenders can now leave jail early as a result of the change.

Lawyers have also won sentence reductions for convicted abusers in at least eight other cases.

A lawyer for the Manada gang, Agustín Martínez, also revealed he was working to get a reduced sentence for one of the five convicted of the attack.

This is because the Spanish criminal code states that when a new law is introduced, new sentences contained within it can be retroactively applied to convicted criminals if they stand to benefit.

So in some cases, lawyers argued that the new law established lower minimum sentences, and that the original sentences should therefore be reduced.

Spain’s Equality Minister Irene Montero, who steered the new law into effect, defended it by saying “machismo may make some judges apply the law incorrectly”.

Her comment “provoked uproar among the legal profession”, Prof Carlos Flores, a law lecturer at the University of Valencia, told the BBC, saying Ms Montero had “decided to put all the blame on the judges, and not admit a mistake”. The main judges’ associations also jointly rejected her claim of male chauvinist bias.

“Now 55% of Spanish judges are women, so blaming them for ‘machismo’ is an insult. And the legal education of judges in gender issues has been going on for a long time,” Prof Flores pointed out.

This row is particularly uncomfortable for the government of Prime Minister Pedro Sánchez as gender equality has been a major policy focus since it took power in early 2020.

The new law was one of the government’s landmark reforms, prompted by widespread outrage after the five were found guilty of sexual abuse, but not rape, and got nine-year jail sentences during their initial trial. After mass protests, the Supreme Court in 2019 increased the jail terms to 15 years.

At the original trial, the men had been cleared of rape on the grounds that neither violence nor intimidation had been used.

The new Guarantee of Sexual Freedom law stipulates that victims no longer have to prove that they suffered violence or intimidation, or that they physically resisted, in order to show that they have suffered a sexual assault. Any sexual act without consent will be liable to be deemed assault.

Amid controversy over the recent sentence reductions, Finance Minister María Jesús Montero said she thought the issue needed to be reviewed “because evidently the goal… wasn’t to lower the sentences for abuse of minors – quite the opposite”.

In one recent case, a man jailed for eight years for having sexually abused his 13-year-old stepdaughter had his sentence cut by two years, by a Madrid court.

A man who raped a 67-year-old woman in her own home was jailed for three years and 10 months, but a Barcelona court ruled that, under the new law, his sentence should be between two and four years.

In Majorca, two sex abusers jailed for three years can now go free, a court has ruled, because they have already served two years.

Prof Flores noted that Justice Minister Pilar Llop – a Socialist – had not commented on this “major legal embarrassment” for the government. He saw that silence as a sign that the new law was “adding to the division in the coalition” between the Socialists and Podemos, the junior party in the leftist coalition.

“Even if you go back to a more punitive law you cannot apply it retrospectively,” he said, adding that “we are bound to have a growing number of cases reviewed”.

Elon Musk: Twitter locks staff out of offices until next week We have no preferred candidate in NDC internal elections 2022 World Cup: Koulibaly powers Senegal to last 16 after win over Ecuador
9 mins ago

Non-teaching staff of colleges of education call off strike