The convener of political pressure group, #FixTheCountry movement, Oliver Mawuse Barker-Vormawor has added his voice to calls for the President, Nana Addo Dankwa Akufo-Addo to step down.

According to him, the president has failed in his mandate, hence the call for the first gentleman of the land to do the honourable thing by bowing out.

Mr.  Barker-Vormawor made the call in an interview with citinewsroom.com on Saturday when he joined the “Ku me preko” demonstration in Accra.

The social activist who is also one of the organisers of the protest accused President Akufo-Addo of not living up to expectations.

“Democratic culture is built on accountability, and demand of citizens for their lot. It is written into the fabric of democracy that, if the leadership, those who have sought the mandate of the people fail to deliver that mandate, people have the right to take back that mandate from them. We say sovereignty belongs to us as the people. So from time to time, we must demand it be returned to the people. This is what this demonstration is all about. The willingness to stand up against brutality, against a regime that is continuously being oppressive, this is what we are here to do, this is what the people have come here to speak against,” he fumed. 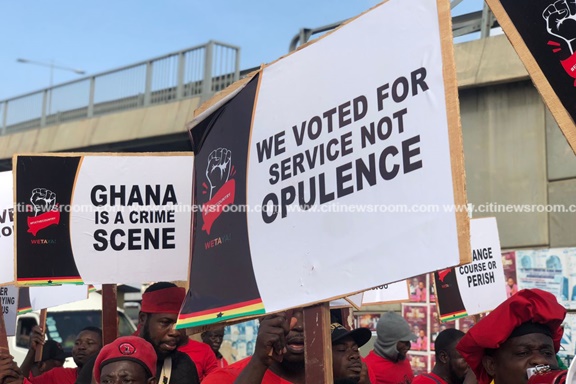 The protestors who were clad in red and black attires holding placards with inscriptions such as: Adinkra Symbol of failure, Boo the President, Sika mpɛ mismanagement, Protect Journalists, impeach the President, the battle over the Lord sef, among others.

A number of police personnel with horses, and armoured vehicles were spotted at the demonstration grounds.

Government is currently seeking support from the International Monetary Fund to help salvage the ailing economy.