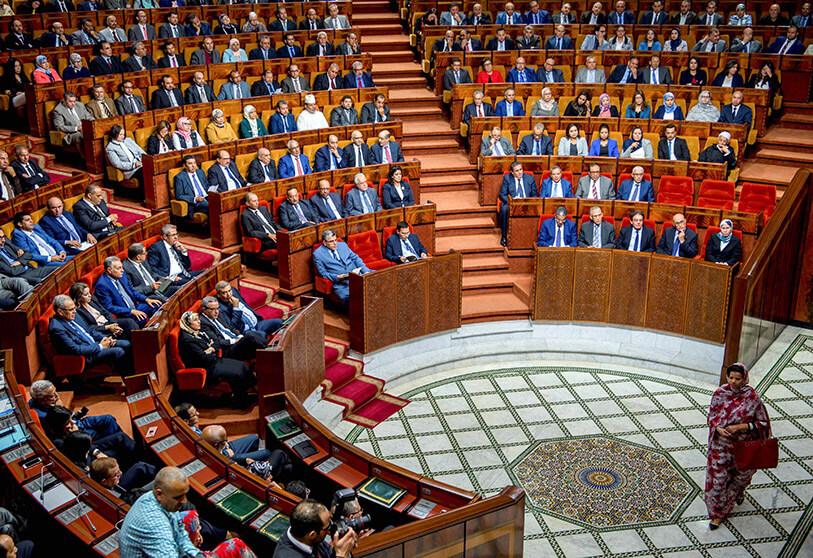 This announcement was made in a statement of the two chambers of the Moroccan Parliament, read by the Speaker of the House of Representatives, Rachid Talbi Alami.

This was at the end of a joint meeting co-chaired with the Speaker of the House of Councillors, Enaam Mayara, which was marked by the speeches of the presidents and representatives of the various parliamentary groups and groupings and parliamentarians without political affiliation.

The Moroccan Parliament condemned thus the insidious campaign waged against the Kingdom, the latest of which was the resolution voted by the EP, on January 19, 2023.

The Moroccan Parliament also decided to inform the European Parliament Presidency of the minutes of this session containing positions and speeches of the presidents and representatives of the various parliamentary groups and groupings, and MPs without political affiliation during this session, as well as the decisions that will be taken.

“The Moroccan Parliament took note with profound astonishment and resentment this resolution which has seriously harmed the trust between the two legislative institutions and undermined their decades-long strategic partnership,” said this statement of the two Chambers of the Parliament, read by the Speaker of the House of Representatives, Rachid Talbi Alami.

It regrets that the European Parliament has allowed itself to be dragged, by some hostile parties within it, into a misleading campaign targeting a long-standing and credible partner that plays major roles in protecting rights and freedoms, as well as safeguarding regional and international peace and security.

Morocco is, in this regard, a pillar of stability, good neighbourliness and understanding between peoples, civilizations and cultures, adds the statement.

In the face of this dangerous drift by an institution that is supposed to distinguish between truth and fallacies, by endeavouring to cement the supremacy of principles and safeguard rights and freedoms in full respect for its geographical competencies and powers and the sovereignty of partner and friendly states, the Parliament of the Kingdom of Morocco, with all its political components and organs, strongly condemns the attempt to harm Morocco’s interests and smear its image, and the distinguished and long-standing relations between Morocco and the European Union that are based on common values and principles, as well as mutual benefits.

It also considers the European Parliament’s resolution an unacceptable transgression of its own competencies and an improper infringement on the sovereignty and independence of Morocco’s judicial institutions, underscoring its refusal to exert guardianship over Morocco or to receive lessons from any party, regardless of the level of relations that bind it to the Kingdom.

The Moroccan Parliament, with all its components and political spectrum, expresses its disappointment at the negative attitude and the non-constructive role played during the discussions in the European Parliament and the consultations on the draft recommendation, by some political groups belonging to a country that is a historical partner of Morocco. It regrets those attitudes and practices that have nothing to do with the loyalty and sincerity that partnership requires.

“The Parliament of the Kingdom of Morocco does not need to reaffirm their adherence to human rights as they are internationally recognised,” says the same source, adding that Morocco is thus distinguished in its regional environment by the dynamism of its civil society, the vitality of its media arena, the credibility of its independent institutions and effective mechanisms in the field of the rights of individuals and groups, as well as its active commitment to relevant international conventions, in addition to its commitment to further consolidate and strengthen the rule of law and institutions, within the framework of political pluralism and freedom of opinion and expression.

The statement underlines that the 60-year-old Moroccan Parliament guarantees rights and freedoms and the means for their full exercise. It exercises legislative power, votes on laws, monitors government work and evaluates public policies, including the fundamental rights and freedoms stipulated in the Kingdom’s 2011 Constitution, mainly the protection and advancement of human rights and their contribution to their development while taking into account the universal nature and their indivisibility of those rights.

The Moroccan Parliament is a key player in many regional and international parliamentary, organizations and enjoys membership within these entities, says the same source, adding that no partner organization has ever transcended its competencies, dared to attack a friendly country and its institutions or interfered in its internal affairs. Rather, it is committed to respecting the sovereignty and fostering mutual institutional trust.

“The Moroccan Parliament is a venue for multidimensional dialogue. It has hosted many international, continental and regional conferences and public and thematic meetings, centered on current issues such as combating terrorism, defending peace and democracy, immigration, human rights, environment, and the integration of Youth in development, equality between men and women, etc,” recalls the statement.
Moreover, the Moroccan Parliament rejects exploiting and politicizing cases falling within the criminal judiciary authority, and in respect of which judicial rulings have been issued on charges that are not at all related to any journalistic activity or the exercise of freedom of opinion and expression.
These cases, according to the statement, are rather related to crimes such as human trafficking, sexual assault and exploitation of persons’ vulnerability, acts that are punishable by the laws of different countries in the world.
In this regard, the Moroccan parliament stresses the need to respect the sanctity and independence of the Moroccan judiciary, which has always been keen to provide the conditions and requirements for a fair trial.
The Moroccan Parliament considers that the European Parliament’s resolution jeopardizes the capital of trust and cooperation between the Moroccan and European parliaments and the progress accumulated over decades of joint work, at a time when we were all looking forward to new and promising horizons for greater efficiency and coordination between the two institutions for the common good and interest of our countries.

The statement says that the European Parliament’s resolution deliberately ignores the institutional mechanisms for dialogue and coordination, which was established specifically to be a platform for comprehensive and frank dialogue within the spirit of partnership and mutual respect.

“This violates the contents and decisions of the bilateral and multilateral meetings and the tireless efforts carried out by the Parliamentary Joint Parliamentary Committee Morocco-European Union, is currently doing since its inception in October 2010, which concretely enshrined the parliamentary dimension of the partnership between Morocco and the European Union and played an important role in strengthening and institutionalising relations between Moroccan and European MPs,” explains the same source.

In this sense, the Moroccan Parliament calls upon the European political forces to show wisdom and discernment, and to reject any deliberate confusion between human rights that are protected in Morocco by the constitution, laws and institutions on the one hand, and the victimhood claims advanced by some parties on the other hand.

Previous Merge some ministries to cut down on govt expenditure
Next JUST IN: Dollar to Cedi; Dollar Sees Another Upward Increment Against The Cedi At Forex Bureaus and BoG -See How The Cedi Is Struggling With Dollar, Other Currencies As Janaury 24