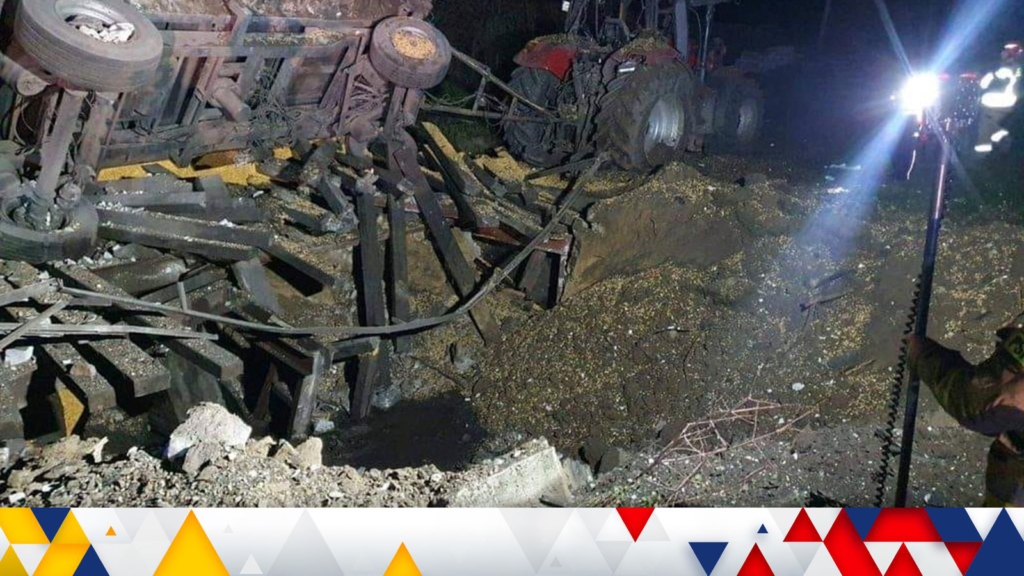 The scene of the missile blast in Przewodow, a village in eastern Poland near the border with Ukraine

US President Joe Biden has disputed Volodymyr Zelenskyy’s assertions that a missile that landed in Poland and killed two people was not of Ukrainian origin.

Ukraine’s president said on Wednesday he had “no doubt” the missile “was not Ukrainian” and called for his officials to have access to the site of the blast.

Mr Biden has said the trajectory suggested the missile was unlikely to have come from Russia and, when asked on Thursday about Mr Zelenskyy’s comments on the issue, he told reporters: “That’s not the evidence.”

The missile hit a grain silo on a farm in Przewodow – around four miles from Poland’s border with Ukraine – on Tuesday.

The blast sparked an international outcry amid the possibility it represented a Russian assault on NATO territory after the Polish ministry of foreign affairs described the missile as “Russian-made”.

However, Moscow insists it did not fire the missile, with Russia’s defence ministry denying Russian involvement, saying: “No strikes on targets near the Ukrainian-Polish state border were made by Russian means of destruction.”

It claimed images of the site showed the wreckage to be that of a Ukrainian S-300 missile.

Three US officials have said preliminary assessments suggest the missile was fired by Ukrainian forces at an incoming Russian one.

Ukraine maintains stocks of Soviet and Russian-made weaponry, including air-defence missiles, and has also seized many more Russian weapons while beating back the Kremlin’s forces during the conflict – now in its ninth month.

The missile blast in Poland had sparked worried talk of NATO’s Article 5, which means an attack on a member country is seen as an attack on all allies.

But Polish President Andrzej Duda has said his country is “very likely” to instead invoke Article 4, which allows a member country of the Western alliance to raise a security issue and have it discussed.

“From the information that we and our allies have, it was an S-300 rocket made in the Soviet Union, an old rocket and there is no evidence that it was launched by the Russian side,” he said.

“It is highly probable that it was fired by Ukrainian anti-aircraft defence to protect Ukrainian territory.”

Nevertheless, NATO Secretary General Jens Stoltenberg has also spoken about the incident and said whatever the outcome of the investigation into the blast, Russia “bears ultimate responsibility as it continues its illegal war against Ukraine”.

“This is not Ukraine’s fault,” he said.

The incident occurred during what Ukraine has described as the biggest wave of Russian missile strikes on its territory since the start of Russia’s invasion in February. Government has not provided IMF with wrong figures – Habib Iddrisu Richard Ofori not out of World Cup – Orlando Pirates

2023 budget was designed for the bourgeoisie, no hope for industry – Anthony Morrison
32 mins ago

2023 budget was designed for the bourgeoisie, no hope for industry – Anthony Morrison

Kudos to the Black Stars – President Akufo-Addo
51 mins ago