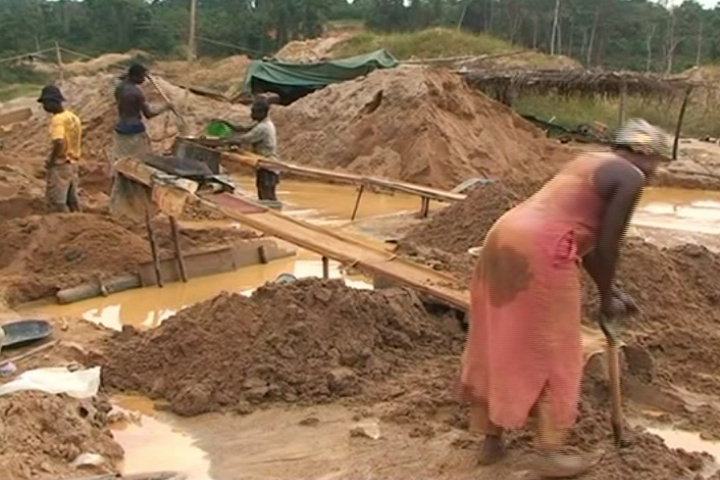 Reduction or possible elimination of mercury (Hg) from artisanal and small-scale gold mining (ASGM) is one of the main goals of the Minamata Convention on Mercury, which Ghana is a signatory.

Mercury pollution in Ghana is said to be reaching alarming level in water and food chain increasing risk of cancer, liver and kidney diseases.

Ghana and other African countries including Kenya, Senegal, Tanzania and Zambia are therefore implementing the African Environmental Health and Pollution Management Programme (AEHPMP) for the next five years with aim to phase out the use of mercury-based products for artisanal small-scale gold mining (ASGM).

As part of the (AEHPMP) project, a strategic outreach and communication strategy is being advanced to effect behavioral change and move users of mercury towards environmentally safe practices and technologies.

Speaking during one of such outreach programs in Bunso in Abuakwa South Municipality for miners and other stakeholders in the enclave , the  Eastern Regional  Director of Environmental Protection Agency, EPA, Felix Addo -Okyereh said miners and community members are aware of the harmful effects of mercury on their health and environment, however, has perception that using unscientific methods and practices such as drinking Akpeteshie, lots of milk, soda and eating hot pepper help to mitigate the impact on their heath hence there is rise in consumption of the products in mining communities.

“Miners and community members are aware of the harmful effects of mercury on humans and the environment. Nonetheless, there are unscientific trade related myths and anecdotes regarding how exposure to mercury can be contained or ameliorated. Some miners believe that the harmful effects of mercury can he neutralized or treated through any of the following practices; by drinking Akpeteshie (locally prepared gin), by drinking soda; and by eating hot pepper”.

He however said these practices not efficacious.

Delivering a keynote address on behalf of the Executive Director of Environmental Protection Agency, EPA, Hon. Henry Kwabena Kokofu, Deputy Executive Director of EPA , Mr. Ebenezer Appah- Sampong revealed that the unregulated and the high use of mercury predominantly by artisanal and small-scale gold miners is adversely impacting food chain through fisheries in the various local and regional fishing areas.

He said lactating mothers and children in mining sites are more vulnerable.

“The informal, unsafe and unregulated nature of mercury use creates a legacy of severe and irreversible environmental and health damage, mercury contamination could have serious economic consequences on the lucrative local and regional fisheries due to the potential health risks associated with it bioaccumulation in parts of the food chain, it is therefore our priority to reduce and where feasible, eliminate mercury use in artisanal and small- scale gold mining”.

He continued that, “Mercury contamination is dangerous to human and environmental health, it is reported that for every gram of gold produced by Artisanal Small-Scale Gold Mining (ASGM), 2 gram of mercury is released into the environment , with 39% emitted into the atmosphere while the remaining 61% is discharged into surface and groundwater as well as soils and sediments” he added.

Hon. Henry Kokofu  said recent developments in the mining sector have resulted in an increasing use of mercury where approximately 80% of elemental mercury imported is used in ASGM operations to recover gold.

Regarding the dangers associated by mercury to  human health, he noted  several reports have highlighted heightened levels of mercury in the blood , urine , hair and fingernails of artisanal miners as well as in persons in communities near mining sites as a result of mercury exposure and contamination which poses serious health implications on affected persons including tremors and sleep disorders , numbness , cardiovascular problems , hyperkeratosis increased thickness of the outer layer of the skin , diabetes and acute respiratory infections.

The Chief of Bunso Osabarima Abiam Brakatu minced no words describing as shameful how Ghana has looked on for irresponsible mining to cause such magnitude of devastation and pollution to the environment.