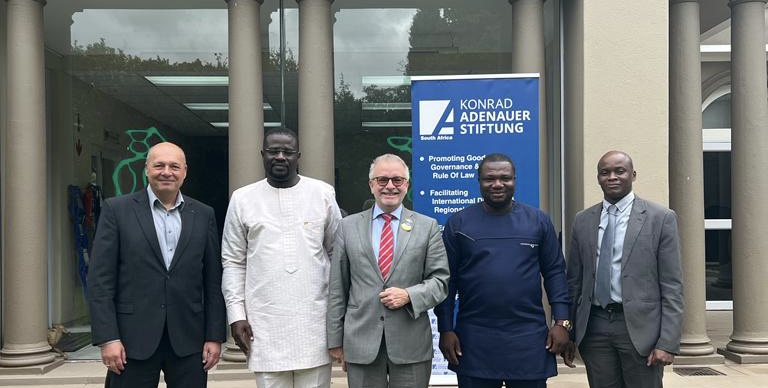 Majority Chief Whip Frank Annoh-Dompreh has appealed to the European Union to help Africa with Custom Tariffs common to all African Countries on the importation of goods to be universal.

According to him, there should be uniform tariffs on goods that are sent to African countries from European Countries regardless of the geographic locations so that they shouldn’t be different but rather uniform.

Annoh-Dompreh, who is the Member of Parliament for Nsawam/Adoagyiri said this during an engagement with some officials of the European Union at a conference held in Johannesburg, South Africa on Friday.

The Majority Chief Whip is currently in Johannesburg, representing the President of the Pan-African Parliament in a high-level discussion with Representatives of the European Union.

The Astute Politician in his remarks also makes the case on the Continental Free Trade Agreement, where he urged the Africans to do their homework on the rules of engagement to get it confirmed since the Secretariat, is hosted in Africa, particularly on Customs Tariff that is becoming critical in terms of destination that has impacts on trade.

The European Union during the engagement also pledged to assist Africa to leverage its Raw materials deposits in the Energy Transition Revolution.

The EU also agreed to support the Committees of the Pan-African Parliament.

The next engagement for a review as gathered will be in December 2022.

The astute Politician as part of the engagement also holds discussions with the delegations on Sub-Regional Security matters, Cooperation, Energy Transition & Investments amongst other matters.

Frank Annoh-Dompreh two months ago was appointed as Leader of All Special Delegation of the President’s Office across Africa by Fortune Charumbire, the President of the Pan-African Parliament.

He was given the mandate to lead the President’s Delegation to Special Missions.

The Majority Chief Whip was honoured by the new ‘Role’ assigned to him due to the confidence imposed on him by the New Pan-African Parliament President. Staff of Colleges of Education to begin indefinite strike from Monday Hiring freeze must be selective – Austin Gamey
25 mins ago

Our 60% base pay demand not unreasonable
27 mins ago