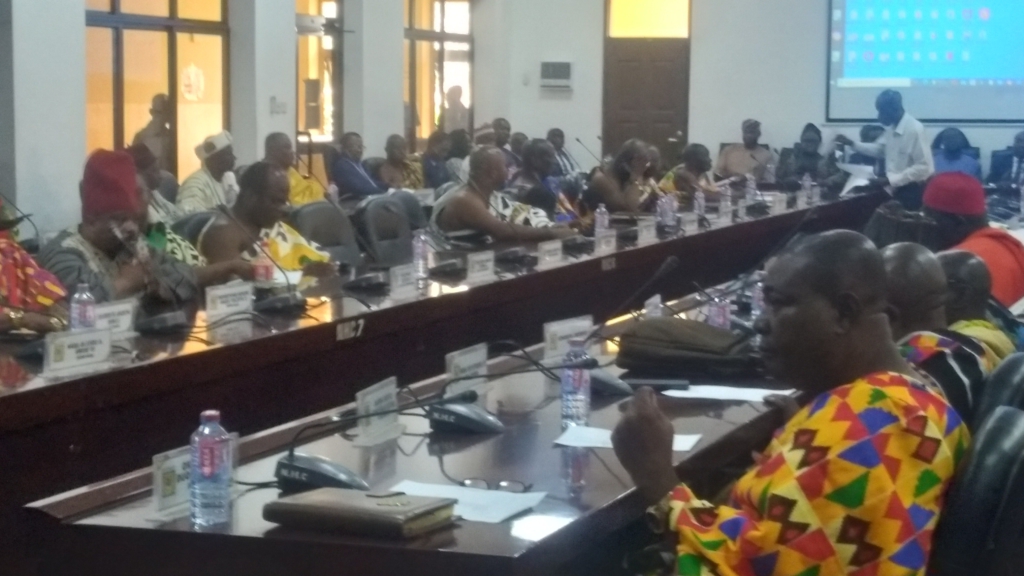 A delegation from the Lands Commission has held a meeting with the National House of Chiefs as part of stakeholder engagements on the new Land Act, 2020 (Act 1036).

The Act revises and consolidates previous enactments on lands into a single law, with the view to ensuring sustainable land administration and management, and effective and efficient land tenure.

The delegation led by the Deputy Minister of Lands and Natural Resources, Benito Owusu Bio briefed the House on the rationale behind the new Act and how it would improve land administration in the country.

Heads of the various agencies under the Ministry took turns to explain their roles under the Act with a call on the Chiefs to be abreast with the Act.

They highlighted key provisions in the Act with emphasis on the Stool Occupants Accountability Regime under the new Land Act which allows indigenes to request accountability from occupants of stool lands.

Mr Benito Owusu Bio said enactment of the new Land Act was to resolve challenges confronting land administration in the country, including the proliferation of land guards, multiple sale of lands and insecurity.

“The Land Act aims at revising, harmonising and consolidating the laws of lands to ensure sustainable land administration and management,” the Deputy Minister emphasised.

He said the goal was to address some of the most pressing issues confronting land administration in the country, stressing that the Act could not work in isolation and required concerted efforts of all stakeholders for effective implementation of the provisions of the Act.

One way of ensuring this, he said, was to sensitise key stakeholders about the Act and the need to embrace it for the collective good of land administration in Ghana.

He said the Lands Commission under the supervision of the Ministry of Lands and Natural Resources held many stakeholder consultations, adding that, Chiefs being custodians of 80 per cent of lands in the country could not be left out.

The Deputy Minister acknowledged the fact that traditional authorities were one of the important stakeholders in the efficient implementation of the Act.

“I wish to humbly entreat members of the House of Chiefs to embrace the provisions of this Act to help bring sanity to our land administration. Also, I request the House to deliberate on the Act and propose inputs to the Ministry for consideration in drafting Legislative Instrument (LI) for the Act,” he implored the Chiefs.

Ogyeahoho Yaw Gyebi II, President of the House, welcomed the initiative to engage the House on such an important matter and called for the cooperation of members for a successful meeting.