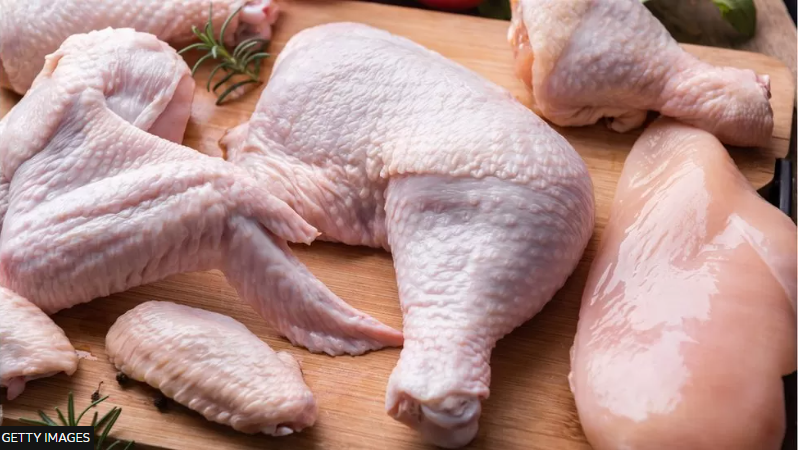 A meat product grown in a lab has been cleared for human consumption for the first time.

The US safety agency, the Food and Drug Administration (FDA), has given approval for cell-cultured chicken, after doing a “careful evaluation”.

It has been made in steel tanks by the firm Upside Foods, using cells harvested from live animals.

It will be able to be sold to consumers after an inspection by the US Department of Agriculture.

The FDA said it used data and information provided by the company to reach its decision, and had “no further questions at this time”.

The firm’s founder and chief executive Uma Valeti said: “We started Upside amid a world full of sceptics, and today, we’ve made history again as the first company to receive a ‘No Questions Letter’ from the FDA for cultivated meat.”

I’ve been looking forward to this day for a long time. UPSIDE has received our “No Questions Letter” from the FDA. They’ve accepted our conclusion that our cultivated chicken is safe to eat, meaning UPSIDE is one step closer to being on tables everywhere. #cultivatedmeat pic.twitter.com/tk4DIF2NSa

Upside Foods will have a number of hurdles to clear before it can sell its products – for example, the facility where the product is made will need formal approval – but Mr Valeti called the news “a watershed moment in the history of food”.

Several start-up food companies have been trying to develop similar products, which could lead to big savings in carbon emissions and water, as well as freeing up land for nature.

Scientists say pressures on the planet could fall by more than 80% with such foods, compared with the typical European diet.

Cultured meat products are forecast to take a larger slice of the total meat market in the future.

The start-up Eat Just, a competitor of Upside Foods, was the first to receive approval to make artificial “clean meat”, in Singapore in 2020. Its nuggets are made from animal muscle cells in a lab.

Two of the largest companies in the sector are Israel-based Future Meat Technologies and Impossible Foods, whose plant-based Impossible Burger was launched in 2016 and grew in popularity.

As a result, the company launched a partnership with Burger King and now Impossible Whoppers are on the menus of most of its outlets in the US.

The Upside Foods FDA approval has been described as a “major milestone” in the industry by Ernst van Orsouw, chief executive of Roslin Technologies – a Scottish-based food tech company.

“It is very exciting to see a globally leading regulator now come to the same conclusion that cultivated meat is safe to eat,” he said.

“The FDA has been taking a risk-based, science-based and practical approach to regulating this novel food, which can be an excellent guide for other jurisdictions as well.”

He said this step “will spur further investment and innovation” in the cultured food industry.

I am disappointed in the Minority - Former New Juaben NPP Chairman I trust Bawumia’s integrity when it comes to corruption We’ve been prevented from airing galamsey exposé at AICC 2022 FIFA WC: Ghanaians should expect more from us – Gideon Mensah after Ghana’s win Hiring freeze must be selective – Austin Gamey
11 mins ago

Our 60% base pay demand not unreasonable
13 mins ago