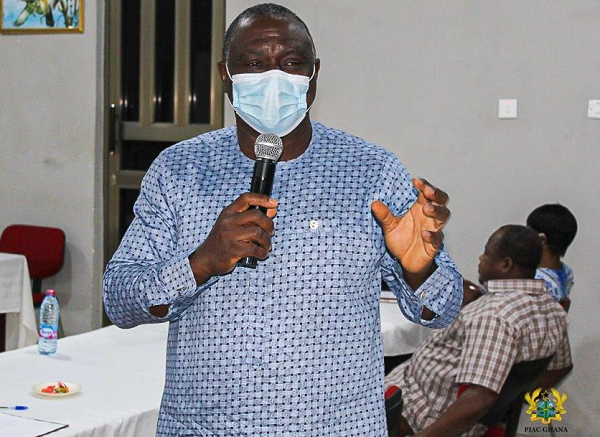 The Chairman of the Public Accounts Sub-Committee of PIAC, Eric Defor has raised concerns about the non-involvement of various Metropolitan, Municipal, and District Assemblies in the execution of infrastructural projects with oil revenue.

According to him, the non-involvement of the MMDAs is causing great hitches due to monitoring lapses.

As a result of the lack of synergy with the various MMDAS most projects being executed with oil revenue are often half-executed and left hanging.

The Chairman raised this concern at a recent stakeholder forum on petroleum revenue management and implications of energy transition on extractive communities organized by Friends of the Nation with support from Oxfam.

“No project is prosecuted from space; all the projects are executed on land and there is no land space that is not covered by an administrative authority. So, when you are going to implement a project in a particular area, it is important that the administrative authorities in that area should be notified. Now there are times when from our engagement with the public, the choice of projects may not necessarily fit with the aspirations of the people,” Mr. Defor explained.

According to the PIAC boss, the involvement of various local assemblies would ensure value for money.

“If there is consultation, then they would pick the need from the community and the timelines when they are going to implement the project. They must engage the community so that they have the community buy in and monitor. But for a contractor to come from Accra to Shama and then there is no relationship with the local level authorities which are the assemblies, as to what project is being implemented, where it is being sited and so on and so forth, we don’t think it’s right,” he added.

Mr. Defor underscored the need for timely release of funds to avert any delay in execution of oil revenue funded projects.

“I mean sometimes a project that should take six months can be on the books for three or four years and we don’t understand why that should be the case. Every three months oil money comes. Where is the money going, why is it not completing the projects you say you are using the oil funds for? So, the solution to that is for them to dedicate resources to the project, make sure that the projects are completed before they move onto other ones”.