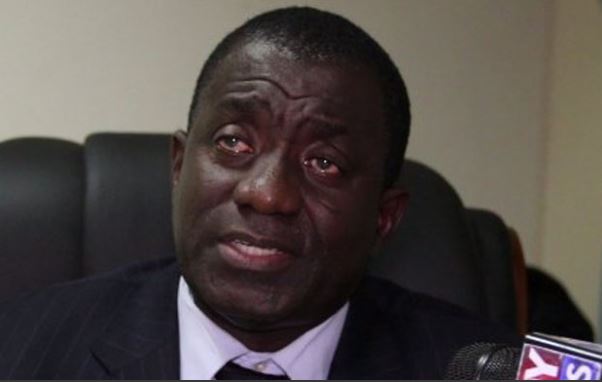 The immediate-past CEO of the Komfo Anokye Teaching Hospital(KATH) Dr. Oheneba Owusu Danso says he can confidently say that he’s leaving the referral hospital a more stronger institution than he met it.

Dr. Oheneba Owusu-Danso, a consultant Plastic, Aesthetic and Hand surgeon, has formally retired after 32 years of service to KATH, the last five of which he was the Chief Executive Officer (CEO) of the hospital.

During his time in office, a number of monumental projects were initiated and another stalled one was reactivated to improve the infrastructure base of the hospital.

Large quantities of medical equipment and consumables including a C.T. scan, C-Arms, theatre tables, oxygen plants, ventilators, patient monitors and anaesthesia machines among others were also procured to improve the stock of equipment at the hospital leading to enhanced delivery of specialist care to patients.

“In the light of the above interventions, I can say with all confidence that I leave KATH a more resilient institution than I came to meet it”, Dr. Owusu-Danso stated.

The Board and Management of the hospital have organized a send-off reception in his honour in recognition of his unbroken service to the hospital and in appreciation for his impressive contribution to its growth during his tenure as the CEO.

The heavily attended event had a number of dignitaries present including Board Members, Directors, heads of departments and units at KATH and the Chief Director at the Ashanti Regional Coordinating Council, Mrs. Emelia Botchwey, who represented the Ashanti Regional Minister, Hon. Simon Osei-Mensah.

The CEOs of the Korle Bu and the Cape Coast Teaching Hospitals were also in attendance.

In his valedictory speech, Dr. Owusu-Danso expressed his heartfelt gratitude to His Excellency, President Nana Addo Dankwa Akuffo-Addo, for the opportunity given him to serve as the CEO of the hospital since 2017.

He described the appointment as a defining moment in his career as medical consultant and administrator. ”For this, I owe the President my deepest appreciation for the rare opportunity given me to head one of the most dynamic and enviable tertiary health institutions in the country and West Africa in general”.

Dr. Owusu-Danso also thanked the Asantehene, the Hon. Ministers for Health and Ashanti Region, the immediate past and present Boards, his management and members of staff for the enormous support given him during his tenure of office.

The Board, Management, some units and other individuals presented citations and gifts in recognition of his great works done during his time as the CEO. The citation from the Board, which was signed by its chairman, Nana Effah Apenteng, who also chaired the function, stated in part “as a CEO, you proved to be a formidable advocate and lobbyist. No wonder then that your tenure of office witnessed the execution of a number of monumental projects that have enormously helped to enhance the operations of the hospital on a scale never seen in its history.

“Among the key iconic projects and acquisitions that easily come to mind are the procurement of two PSA Oxygen Plants and ancillary facilities valued at over Ghc6m, the completion of a 49-bed block of flats for House Officers at the cost of Gh4.7m, and the ongoing construction of the Assisted Reproductive Technology (ART) center project to provide cutting edge fertility services to the public.

“Under your tenure, KATH became the first Teaching Hospital to be accredited by the Health Facilities Regulatory Agency (HeFRA). During the process, KATH registered the highest score among the Teaching Hospitals in the country.

To enhance operational efficiency and deepen the provision of specialist and subspecialist clinical care, training and research, new directorates and units including Radiology and Laboratory Services Directorates were created during your tenure of office.

Also included is the Adoption of KATH Staff Retirees Policy, the Establishment of the Project Implementation and Management Unit (PIMU), the Rehabilitation of KATH roads as part of Kumasi Metro Roads Project, the Establishment of Reproductive Endocrinology and Infertility Unit and the construction of Assisted Reproductive Technology (ART) Centre at KATH, Installation of CCTV throughout the hospital to enhance security monitoring, improved supplier management as a result of better and fair payment arrangements, procurement of Planned Preventive Maintenance agreements for key equipment”.

Dr. Owusu-Danso was appointed into office in July 2017 by his Excellency President Nana Akuffo-Addo and served under two separate Boards, both chaired by Nana Effah Apenteng. You can’t come and throw your weight about’ – Ablakwa vs. Gabby blow by blow exchanges –