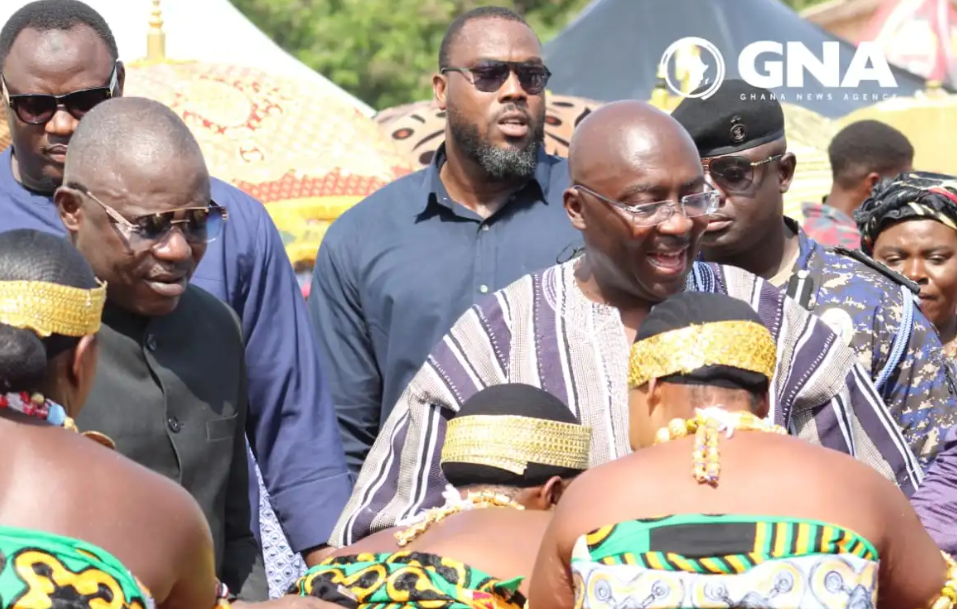 Vice President Mahamudu Bawumia Saturday received a rousing welcome at the Hogbetsotso Festival of the Anlo State in the Volta Region.

The enthusiastic crowd chanted New Patriotic Party (NPP) songs to welcome the Vice President and his entourage to the 2022 festival, which marks the 60th anniversary of the Hogbetsotsoza.

This year’s celebration is on the theme: “60 years of Anlo Hogbetsotso Za: Uniting for development, sustaining our unique cultural commonwealth for future generations”.

Other chiefs and personalities from the Volta Region and diasporans also graced the historic ceremony.

The Vice President called for togetherness for rapid socio-economic development.

Hogbetsotso is celebrated in November at Anloga, which is the traditional and ritual capital of the Anlo State.

The Festival unfolds Ewe history and brings to play the memories of legendary exodus and heroic acts of men of boldness and their mystical powers that liberated the Ewe-Dogbo people from the rule of tyrant King of Kings-Torgbui Agokorli of Nortsie in Togo.

Hence, Hogbetsotso is derived from the word ‘Hogbe’ or ‘Hohogbe’-the day of exodus – the moment in time when the Ewes in the Dogbo quarter of the walled city of Nortsie in Togo, escaped from the tyrannical ruler Agorkorli by walking backwards.

In order to commemorate the exodus and the bravery of their traditional rulers who led them on the journey, the people commemorate the annual festival of the Exodus – “Hogbetsotsoza”.

Thirty-six states from the Anlo Traditional Area are participating in this year’s celebration.

NsuomNam: How much would it cost to eat at Akufo-Addo’s daughter's restaurant?

1D1F will be abolished if NDC wins power - Murtala You served with humility, hard work and discipline

SC orders Anas to face Nyantakyi in court without mask

Court fines Nana Ama McBrown, A Plus and Mr Logic GHS18,000; Jails other in Chairman Wontumi’s case
1 hour ago