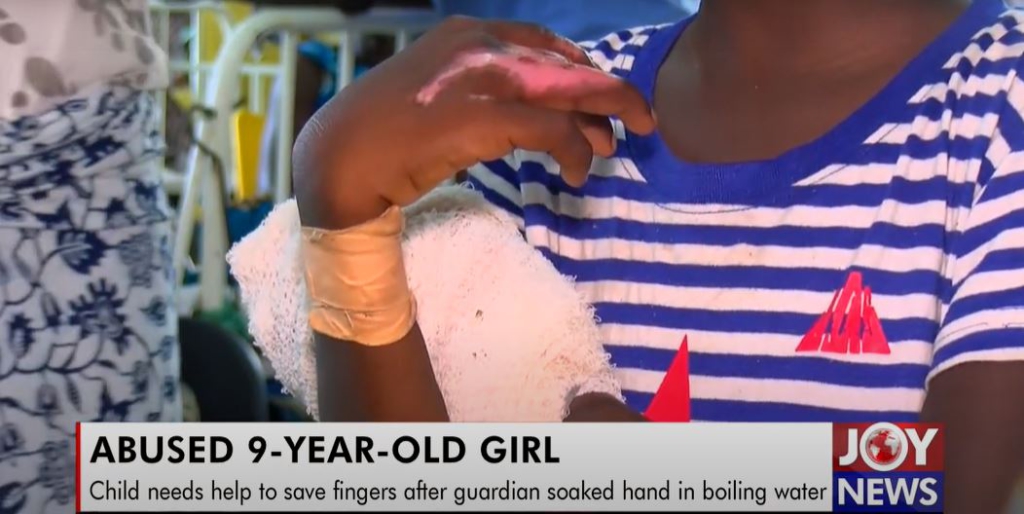 A 32-year-old-teacher accused of literally boiling the hand of a nine-year-old girl has pleaded not guilty before a Goaso Circuit Court in the Ahafo Region.

Ellen Serwaa is alleged to have held the hand of the girl in boiling water for taking her two cedis to buy snacks.

After a series of surgeries and six months of admission at the Komfo Anokye Teaching Hospital, the victim has full function of the left hand.

Prosecutors on the case on Wednesday presented a fresh charge sheet to the court charging her for unlawfully causing harm.

Little Stephanie was in court for the first time since her abuse but the accused has been appearing before court.

Her alleged abuser, Ellen Serwaa, 32, a teacher came to court with her baby. She pleaded not guilty to a charge of unlawfully causing harm.

The Prosecutor, Chief Inspector, Eric Dzordor told the court that the accused Ellen Serwaa, held the victim’s hand in hot water until it developed blisters.

He added that she used razor blade to cut into the blisters and kept the victim at home for three weeks before seeking medical assistance.

He quoted a medical report from Komfo Anokye Teaching hospital indicating the victim doesn’t have full function of the left hand after six months in the hospital and going through a series of surgeries.

Lawyer for the accused, Albert Zogah described the prosecution’s facts as “concocted lies”.

He said “facts are not evidence and the “first to speak is always right until subjected to cross-examination”.

The Judge, His Honour Charles Kwasi Acheampong granted the lawyer’s plea for bail in the sum of 90,000 Ghana cedis with four sureties, one to be justified with a landed property within the jurisdiction of the court.

The case has been adjourned to the 6th of December for a case management conference.

Foreign Affairs Ministry to be dragged to Parliament over unauthorized release UGSRC elections: A 5-year-old unbroken chain of how 1st round winners lose at runoffs

Sustainably fashionable in Ghana – AI Sees The World
21 mins ago