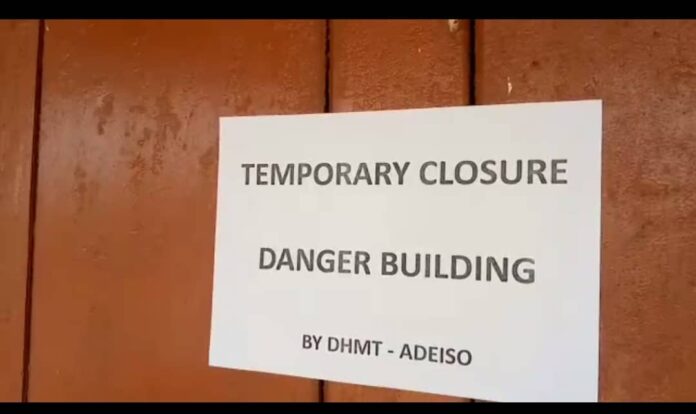 The Ghana Health Service(GHS), has withdrawn nurses from the CHPS compound in Asikesu a farming community in Upper West Akyem Municipality due to perilous condition of the facility.

A portion of the building collapsed few weeks ago forcing the Ghana Health Service and the District Assembly to shut down the facility.

The municipal health Director Thomas Azurago told Starr News, the closure of the façility was necessitated by safety concerns of the nurses.

“Before you even enter the building particularly when pregnant mothers are climbing into the building that is the first danger. The building itself is so weak. A portion fell over last week, so can we still keep the staff in such a place.The DCE is aware the assembly member is aware. We didn’t just close the place. The people need health services but we can’t expose our staff to danger”

He said, in the mean time, clients in the community should attend to health facilities in nearby communities such as Asuokyene and Mepom.

The Health Director indicated that, many buildings being used as CHPs compound in the municipality are in deplorable conditions which risk similar closure if not rehabilitated.

The Chief of Asikasu Barima Agyei Konadu Yiadom II, said he has constructed a new facility to be used as CHPs compound which is almost completed however all efforts to get financial support from the assembly to complete and furnish it has proved futile.

He said, the absence of a functioning health facility in the community is already having effect on the people.

The chief claimed a pregnant woman nearly lost her life at night when labour set in.

The Eastern Regional Deputy Health Director, Dr. John Ekow Otoo has meanwhile revealed that most CHPS Compounds in the region do not meet the standard of which a health facility can be considered as a CHPS Compound.

According to him, there are over 800 CHPS zones in the Eastern region but less than 80 of them can be considered as a functional CHPS compounds.

Dr. John Ekow Otoo explained that a CHIP compound needs to meet certain standards such as the ability to have enough infrastructure to accommodate the health personnel or the staffs before it can be considered as a CHPS compound.

He added that a functional CHPS compound should have a staff who are well trained to play their roles independently in terms of providing health services to patients who visit their facility but that is not the situation in the region.

Be prepared to buy soup, stew in addition to your fufu, rice – some restaurant owners hint Pre-laying C.I before Parliament will allow content to be vetted – Dafeamekpor explains Some government officials and politicians are involved in illegal mining – Asantehene

EVIBES USA series: Fritz Oakley talks about life in US, music and concert
46 mins ago