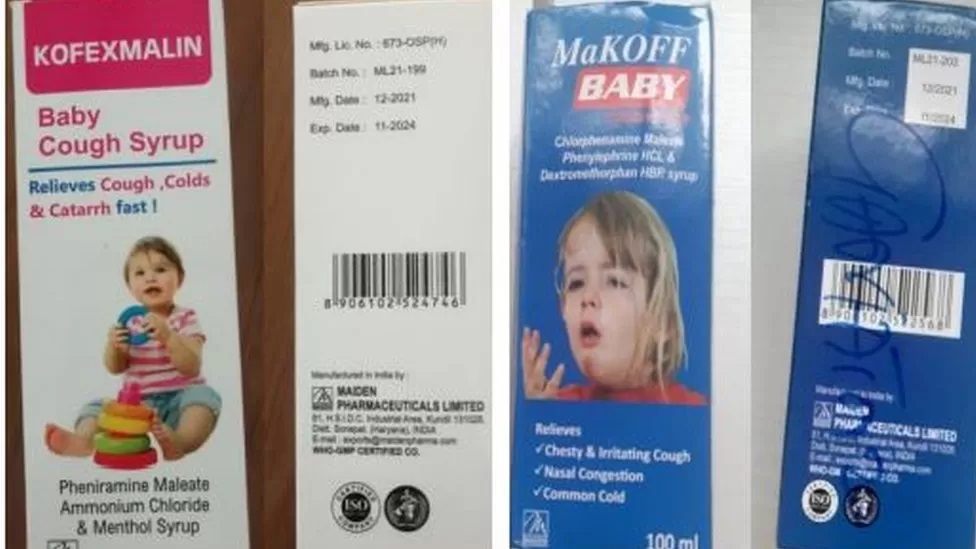 A parliamentary committee in The Gambia has recommended prosecution of the Indian manufacturer of cough syrups suspected of causing the deaths of at least 70 children in the country.

It said Maiden Pharmaceuticals should be held accountable for exporting what it called contaminated medicine.

The WHO had issued an alert in October advising regulators to stop the sale of the syrups.

Maiden Pharmaceuticals had denied the allegations.

Government labs in India said their tests on the syrups found that they were “complying with specifications”. An Indian official said last week that the WHO was “presumptuous” in blaming the syrups.

But the global health body told the BBC it was only following its mandate and “stands by the action taken”.

After weeks of investigation, the Gambian parliamentary committee has now recommended that authorities should take tough measures, including banning all Maiden Pharmaceuticals products in the country and taking legal action against the firm.

The committee said it “is convinced that Maiden Pharmaceuticals [is] culpable and should be held accountable for exporting the contaminated medicines”.

“The findings remain the same with the previous reports which indicates that Promethazine Oral Solution, Kofexmalin Baby Cough Syrup, Makoff Baby Cough Syrup and Magrip N Cold Syrup were contaminated with diethylene glycol and ethylene glycol,” the parliamentary committee said in its report.

Diethylene glycol and ethylene glycol are toxic to humans and could be fatal if consumed. But the panel added that the exact scientific cause of the children’s deaths was still under investigation.

The committee also wanted the country’s Medicine Control Agency to ensure all medicines imported into the country are properly registered and background checks conducted on manufacturers – including visiting their facilities.

The report also revealed inadequacies in the country’s healthcare system urging the government to strengthen it and provide better equipment and medicines to the country’s hospitals.

In late July, The Gambia detected an increase in cases of acute kidney injury among children under the age of five. The government later said around 69 children had died from these injuries.

The WHO then identified four of the Maiden Pharmaceuticals’ medicines as potentially linked to the deaths of the Gambian children and issued a global alert.

After the news broke in October, India said that it was investigating the products and ordered Maiden Pharmaceuticals to stop production at its main factory in the northern state of Haryana.

On 13 December, Dr VG Somani, India’s drugs controller general, wrote a letter to the WHO saying that the samples it tested at a government laboratory “were found not to have been contaminated” with the compounds.

“As per the test reports received from [the] government laboratory, all the control samples of the four products have been found to be complying with specifications,” he added.

The test results are being further examined by a panel of Indian experts.

A senior adviser to India’s information and broadcasting ministry told the BBC last week that the WHO had been “presumptuous” in blaming the cough syrups for the deaths of the children.

“Subsequent inspections, tests and studies by Government of India’s notified bodies and technical team have shown that WHO’s presumptuous statement was untrue and incorrect,” said Kanchan Gupta, adding that the health body had “[jumped] the gun without valid scientific reasons”.

India produces a third of the world’s medicines, mostly in the form of generic drugs.

Home to some of the fastest growing pharmaceutical companies, the country is known as the “world’s pharmacy” and meets much of the medical needs of African nations.

Previous Man dies after allegedly being hit in the head with stick
Next Steve Hanke finally speaks after Cedi gain; says it fell by 31.17% against the USD since Jan. Tax analyst, Dr. Alex Ampaabeng has asked the government of Ghana to allow the Ghana …