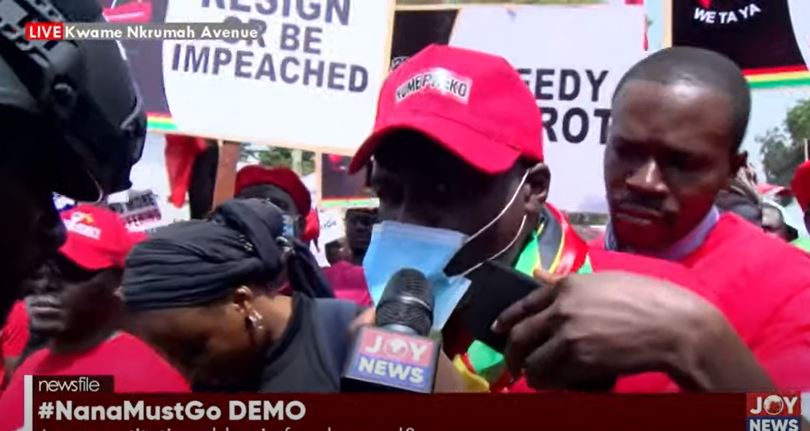 Speaking on the sidelines of the ongoing ‘Ku Me Preko Reloaded’ demonstration, he claimed that Nana Akufo-Addo’s family and friends receive their shares of every money government borrows.

He said that is a corrupt practice which must not be condoned by any well-meaning citizen of the country, and it is a reason for their demand for the president, his vice and the Finance Minister to resign from duty.

“Thousands of our fellow citizens have come out to send a message to President Akufo-Addo that enough of the family and friends business, that he must resign.

“He came to superintend over a government that is family and friends and in the process they have benefited from every cedi and every dollar we have borrowed, which is wrong and which has led to the current economic crisis,” he stated.

According to him, President Akufo-Addo, Dr Bawumia and Ken Ofori-Atta have breached provisions in Article 284 of the 1992 Constitution.

“This is because every cedi we borrow, every dollar we borrow, Databank gets a cut which is wrong. We can’t allow this conflict of interest. In this case, that is corruption.”

Scores of protesters have massed up in the streets of Accra to register their displeasure at the government over what they say is the mismanagement of the economy.

Among other demands, they want President Akufo-Addo to resign in order to pave way for the constitutional provision for his replacement to be set in motion.

Asantehene Storms Anlo For Hogbetsotso 2022 | The history So far My Husband Died After He Slept With Another Woman Years Ago