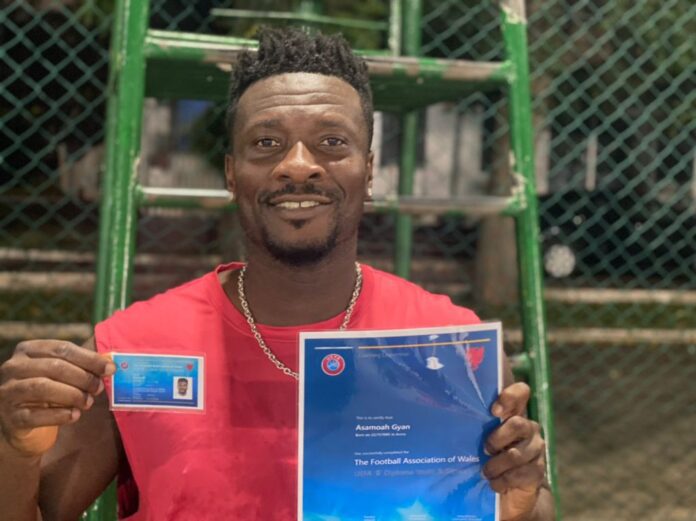 Former Black Stars captain Asamoah Gyan, has begun his journey into football management after acquiring a UEFA B coaching license.

Earlier this year, the veteran forward was in the United Kingdom (UK) for a coaching course organized by the Football Association of Wales (FAW).

Gyan followed in the footsteps of Yaya Toure and Thierry Henry, both ex-footballers who previously participated in the FAW’s coaching course.

In a tweet, he announced to his fans that he has finally completed his UEFA B coaching license.

He further stated that having a coaching clinic is next on his agenda, adding that that could happen in January next year.

“Your new UEFA License Coach is here, thanks to all who made it possible & a special one to the Wales FA , this is just the beginning. January 2023 Coaching Clinic loading,” Gyan tweeted.

The former Sunderland and Al Ain star insists he isn’t retired yet, but he hasn’t been involved in active football for over a year now.

He has also not featured for the Black Stars since playing at the 2019 Africa Cup of Nations (AFCON) in Egypt.

In April, the veteran striker also revealed that he was open to becoming the strikers’ coach of the senior national team.

He was, however, quick to add that he would first need to get his coaching badges in order before taking up such a role.

Now that he holds a UEFA B license, it remains to be seen whether he will join a club in a managerial role. E-Vibes USA edition: Fritz Oakley talks about life in US, music and concert
21 mins ago

E-Vibes USA edition: Fritz Oakley talks about life in US, music and concert

Kudus Mohammed: The heart of a Black Star
23 mins ago

Kudus Mohammed: The heart of a Black Star

World Cup 2022: Ghana aim for revenge against Uruguay for 2010 exit