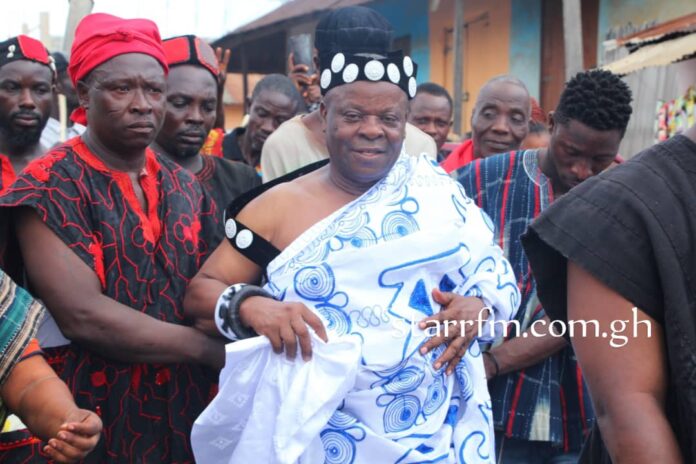 A former Member of Parliament for Upper West Akyem in the 5th and 6th Parliament of Ghana,Joseph Sam Amankwanor has been enstooled  Fantehene in Adeiso Traditional Area in the Eastern region.

He was given stool name Nana Kwaku Botwe II at a colourful traditional swearing -in ceremony held at Adeiso Palace having been paraded in town as tradition demands.

Adeiso Traditional Area is heterogeneous due to its border sharing proximity to Greater Accra and Central regions.

Other tribes include Ewes whose population are second largest with 29,444 representing 31.7% of the total population.

Nana Kwaku Botwe II, as Chief of Fantes rules over the Fante Population in the area.

Speaking to the media,Nana Kwaku Botwe II reiterated his commitment to peace, unity and development in the area.

He however bemoaned growing youth unemployment in the Upper West Akyem District over the past few years which has resulted in increase in deviancy.

He therefore appealed to government to immediately intervene to help address the rising unemployment rate in the area since it is becoming threat to security.

The Chief of Adeiso,Osabarima Asare Oduro expressed his excitement that after five years the Fante stool became vacant, a successor has been found to occupy it.

He said as heterogeneous society,inclusiveness in decision making is critical to spur up development and consensus building.

Osabarima Asare Oduro, also raised serious concern over growing insecurity in the area due to increasing pilfering and burglary attributing it to unemployment.

He stressed on interventions for job opportunities for the youth and urged government to expand a market facility in the the district capital (Adeiso) to contain the increasing market women population forcing many to play their trade on the road.

No scheme, no evil strategies, no diabolism will work against you - Annoh-Dompreh to Bawumia