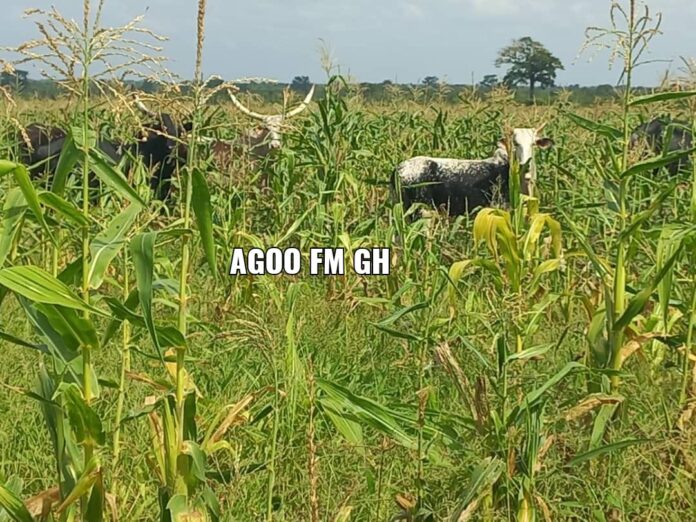 Some farmers at Kwahu Tafo in the Kwahu East District of the Eastern Region have embarked on a protest over the invasion of nomadic Fulani herdsmen in the area.

Speaking to EIB subsidiary station in Nkawkaw, Agoo FM, one of the Assembly members who led the protest, Boamah Alexander said the nomadic herdsmen are destroying their farms with impunity and unleashing terror on farmers.

He alleged that many farmers have been attacked by the lawless herdsmen.

The farmers petitioned the Member of Parliament for Abetifi Constituency Bryan Acheampong, Kwahu Tafo Chief, and the Kwahu East Assembly.

“We the farmers of Kwahu Tafo write with great concern this petition to bring to your notice the difficulties and challenges we are going through as a result of the presence of Fulani herdsmen in our community. Some of us cultivate cash crops especially cocoa and majority of us are subsistence farmers who grow crops like maize, cassava, yam and cocoyam, tomatoes, pepper, carrots, cabbage, green pepper, and cucumber” excerpts of the petition stated.

The farmers continued in the petition that, the herdsmen usually destroy crops with their cattle at night, adding that, they sometimes set fire to the farms.

“Our concern is that, the herdsmen allow their cattle to come to our farms and destroy our crops. The destruction of our crops usually occurs in the night. The following morning we go to our farms to find out our crops have been completely destroyed. In some cases, they deliberately burn the bush in which the new growth serves as grazing ground for their animals”.

The farmers alleged that “most of the herdsmen armed themselves with rifles when they walk around in the bush which in itself is very intimidating. We are experiencing untold hardship as a result of their nefarious activities which are adversely affecting our farming activities and livelihood and thereby posting a threat to our very existence. We are therefore presenting this petition to you to bring to the fore the plight of farmers of Kwahu Tafo as a result of the presence of Fulani herdsmen on our farmlands”

The aggrieved farmers are demanding an immediate clamp down on the herdsmen.

“We are by this petition demanding the removal of these herdsmen from our farmlands to enable us farm peacefully. We count so much on your kind cooperation in this regard and look forward to a swift response to our plea”.

Kwahu Afram Plains area is notorious for fatal clashes between farmers and nomadic herdsmen particularly during the dry season.

General Secretary of the Tabital Pulaaki International, Ghana Chapter, Yakubu Musah Barry has called on government and the National Security Ministry to check the illegal entry of hundreds of Fulani herdsmen from Saharan countries to Ghana during dry seasons.

He said the situation is not only a threat to national security but also to food security.

He said some of these nomadic herdsmen may be kidnappers, hardened criminals, or terrorists who enter the country unchecked and commit atrocities and crimes in farming communities.

Government established a cattle ranch at Wawase to address their situation however many of the herdsmen have abandoned the facility.