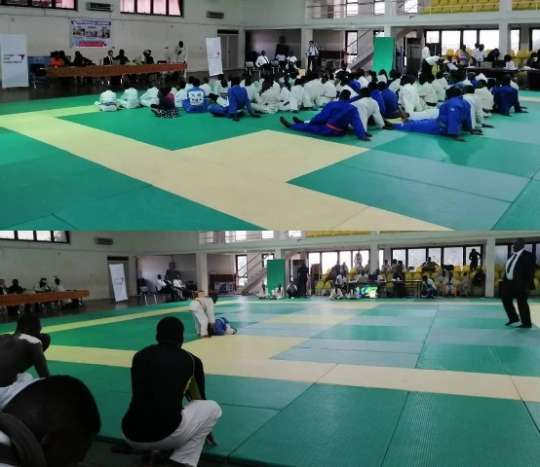 Evelyn Dzato has been crowned the winner of the Japanese Ambassador Judo Championship, held at the Hathiramani Hall at the Accra Sport Stadium over the weekend.

The championship, popularly known as the “Ambassadors Cup,” was the 22nd edition to be organised after a long break of Covid-19 pandemic.

The Under-18 categories were equally interesting with Esther Anane triumphing over Nhyira Twum Baah for the first position whilst Felicia Koranteng came third.

In the Under 14 girls Joanel Fiazuku was crowned champion followed by Hannah Hammond with Christabel Gaduga placing third.

All participants were awarded with certificates of participation and medals.

Speaking to the media His Excellence Mochizuki Hisanobu Japanese Ambassador to Ghana was delighted with the organization of the competition.
He said, “I’m so impressed with the performance by the young Judokas. It was wonderful watching the game after a long break of Covid-19.

“The attendance was encouraging because about hundred people took part including children and I’m happy that these young kids are following the Japanese traditions.

Mr. Emmanuel Tetteh, President of the Ghana Judo Association (GJA) said he was overwhelmed with the performance put up by the young judokas.

“We had a lot of kids performing which shows that judo has a future in the country.
We targeted basic schools where we can get young children participating, and we are impressed with the outcome”.

He said the Judo national team participated in African Games and put up impressive performance adding they were looking forward to winning more medals for the country at the 2023 Africa Games to be hosted by Ghana.

Mr. Kwab Asamoah an Executive Member, GJA said the participation of young children in the competition showed that the game had a future.

“The age group of the children who participated show that the future looks great, and we would continue to prepare Ghana Judo for higher success,” he added. Ghana will be a difficult side to beat – South Korea coach ASU votes Kwame Adom Frimpong as player of the month