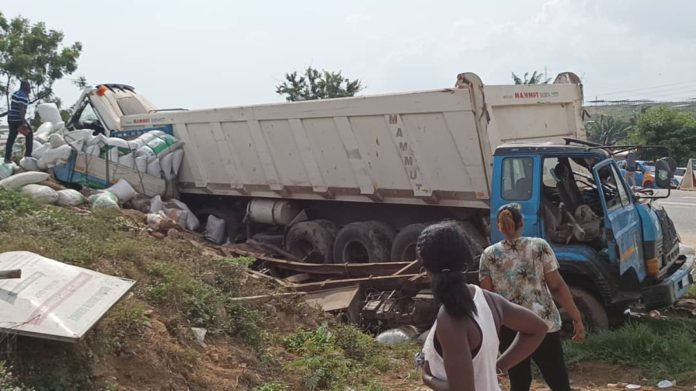 A driver’s mate died on the spot and two others are in critical condition after a gory accident at Gomoa Dominase Junction in the Gomoa East District of the Central region.

Eyewitnesses told Adom News that the Kia Rhino was heading towards the Kasoa-Cape Coast Highway from the Gomoa Dominase township.

Upon reaching a section of the road, the engine went off, causing the driver to step down to fix it but did not watch out for any oncoming vehicle in his attempt to get back unto the road.

The tipper truck driver who was coming from Accra to Cape Coast, unfortunately, collided with the Kia, causing the death of the driver’s mate.

Some persons who helped to remove the victims from the vehicle said they have been sent to the Winneba Trauma and Specialist Hospital for treatment.

Meanwhile, the Omankrado of Gomoa Akyampim Traditional Council, Nana Kwao Adofrakye, has appealed to President Akufo-Addo and the Minister of Roads and Highways to dualise the Kasoa -Cape Coast Highway which over the years has been accident-prone.