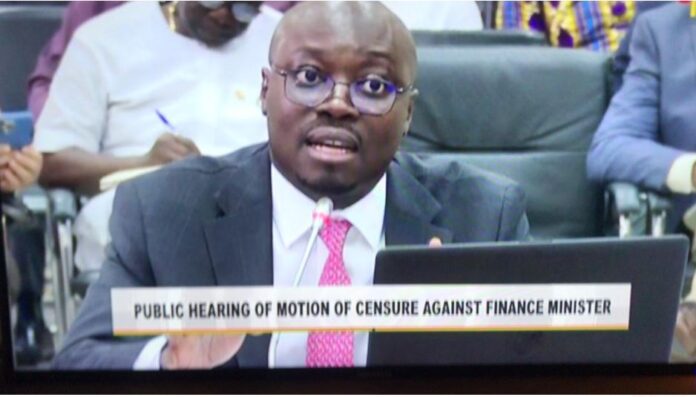 The first public hearing of the ad-hoc committee for minority censure motion against finance minister Ken Ofori-Atta was characterized by heated exchanges, flaring tempers and objections.

The finance minister through his lawyer Gabby Asare Otchere-Darko had written to demand all documents the minority will be relying on to ground their motion for his removal.

The minority had provided 7 grounds based on which they argued the finance minister is not fit to continue holding himself as such. This request led to a back and forth among the committee members.

Comments by Gabby Asare Otchere-Darko to the effect, the request was to enable the finance minister deal quickly with the hearing since he has to attend to the 2023 budget and the IMF negotiations infuriated some members of the committee and North Tongu MP Samuel Okudzeto Ablakwa minced no words in pointing that out.

The committee eventually settled on providing the finance minister with a list of documents. The development paved the way for the hearing proper to commence.

Minority leader Haruna Iddrisu commenced proceedings by expatiating on the claims of his side. Ranking member for the finance committee Cassiel Ato Forson further added to the reasons why the minority believes Ken Ofori-Atta must go.

In all these, there were questions from members of the committee to the two witnesses. Sekondi MP and deputy energy minister Andrew Agyapa-Mercer and co-chair of the committee KT Hammond’s questions stood out to many as seeking to hold brief for the minister.

Haruna Iddrisu and Ato Forson however had answers to the questions spanning from borrowing, to banking sector clean up to energy sector debt. Messi scores in vital Argentina win over Mexico
20 mins ago