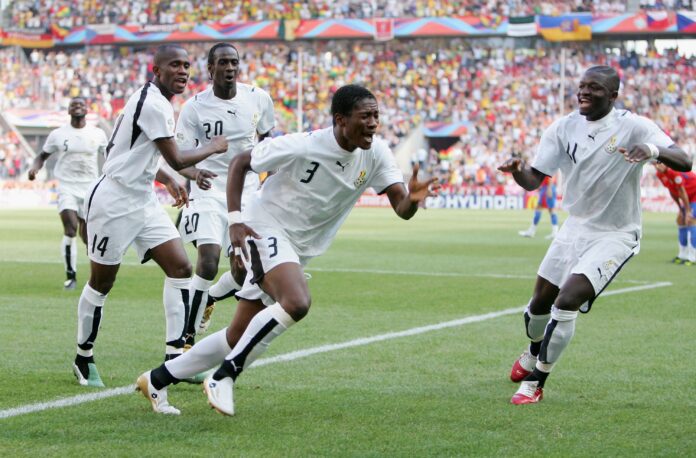 With a few days to the world’s prestigious football competition in Qatar, Ghana has seen highs and lows throughout its history.
Having numerous players switching nationalities to represent Ghana, the enthusiasm towards the competition has become encouraging.

In retrospect, reliving Ghana’s first and memorable adventure at the Mundial sixteen (16) years ago is one to be proud of.
For a relatively young generation of about thirty (30) million football enthusiasts, it’s worth noting underlying and highlighting some factors that hitherto may have contributed to Ghana’s maiden exploits in Germany.

With chills down their spine and ready to go into overdrive, the Black Stars sang and passionately hummed the national anthem in the HDI-Arena in Hannover at her maiden world cup appearance. Ghana was represented by a promising squad featuring Asamoah Gyan, Sulley Muntari, Micheal Essien, and Stephen Appiah among others but of wet behind the ears were overwhelmed by a seasoned world cup campaigner, Italy.

Surprising wins against the highly ranked Czech Republic and the USA meant a date was set to face a star-studded Brazilian side in the round of 16. The streets of Accra were rammed. Car roofs were used as dance floors. Flags praising Ghana everywhere. Children, office workers, and street hawkers all hug spontaneously. Work was finished for the day. A long journey into a night of partying beckoned in celebration of especially Ghana’s landmark 2-1 victory over the United States in Nuremberg.

In Dortmund, the Black Stars had a dream match. They played Brazil, five times as World Cup winners and then current holders of the trophy. As the serious dancing and drinking and partying began, and the football got serious, Michael Essien, one of Ghana’s outstanding performers, found it difficult to smile. The Chelsea midfielder was suspended, having been shown a yellow card against the USA, his second of the tournament. He did miss the biggest game in Ghana’s history then.

Ghana controlled play and created numerous half-chances, but poor imagination, delivery and finishing let them down every time and eventually lost by 3 goals to nil. With heads high, the Black Stars bowed out of the competition but there was a basic fundamental element to this output.

At the club level, captains of the side, Appiah and Essien had just helped Fenerbahce and Chelsea clinch the Turkish Super League Championship and EPL respectively. Ahead of the world cup, Richard Kingston was averaging 54.5 saves per game and Sammy Kuffour had 7 Bundesliga titles to his chest before his expedition to Italy that season and subsequently embarking on an adventure with the Black Stars to familiar ground in Germany. Like the aforementioned, John Mensah, John Painstil, Dan Quaye, Shilla illiasu, Habib Mohammad, Asamoah Gyan and Muntari all made significant contributions to their respective clubs and were considered indispensable by many.

For a country more riven by football’s internecine politics than anywhere else, it is hardly surprising that Ghana’s passage to Germany was not smooth. There were five coaches in two years, three during qualification.

The past may be gone but there’s an ecstatic nostalgia with Qatar 2022 in sight. Will the current generation of players led by Andre Ayew put a dozen smiles on the faces of Ghanaians? Or is there going to be a repetition of the Brazil debacle?

Harmonious Chorale dissociates itself from ‘Yete Sika So’ song Kantamanto fire: We are providing additional support – Police
7 mins ago

‘Mr and Mrs Adeleke’: Fans gush over photos of Chioma with Davido and her in-laws during 1st public appearance
20 mins ago