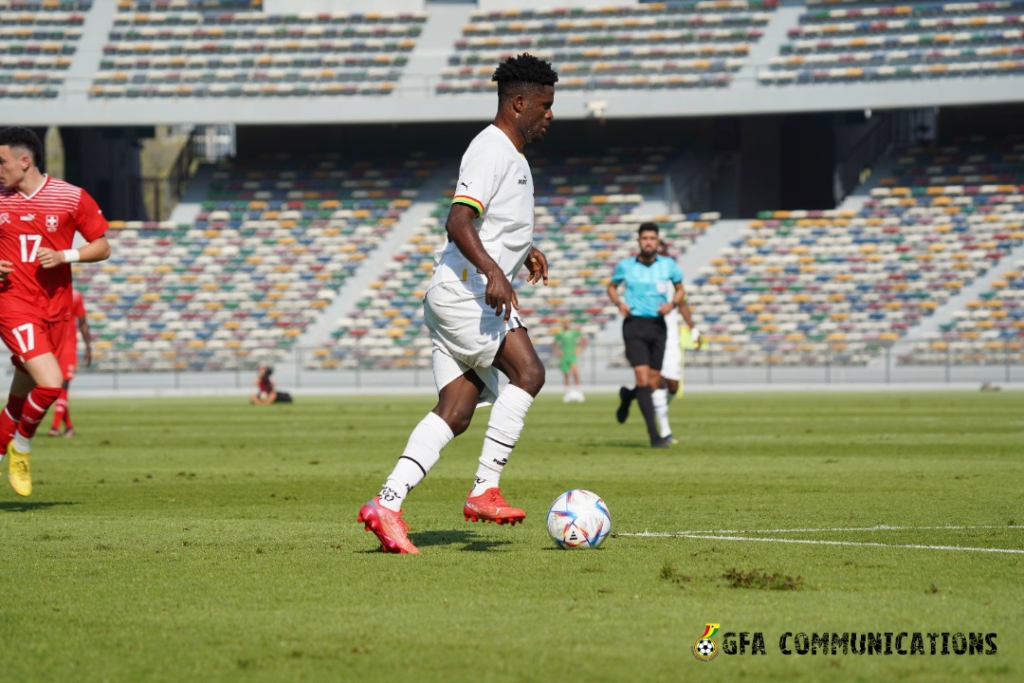 Ghanaians on social media have sprinkled praises on Hearts of Oak forward, Danieh Afriyie Barnieh for his stunning performance against the Swiss side.

The forward was named in the 26-man squad of the Black Stars ahead of Qatar 2022 World Cup.

Barnieh made an appearance at the last minute for the Black Stars in friendlies against Nicaragua.

However, he appeared in the first XI for the team on Thursday in a friendly match against Switzerland.

The 21-year-old started on the right side alongside the Ayew brothers to provide support to his co-striker Inaki Williams.

In the first half of the game, Barnieh made an impressive run, terrorising the Swiss defence and also providing an attacking spark for the Black Stars.

Ghanaians have been taken aback by the performance of the Hearts of Oak striker.

The game ended 2-0 in favour of the Black Stars.

Afriyie Barnieh is showing the World Football made in Hearts of Oak. Better than Ansu Fati and Dembele

If we are being Fair, Kamaldeen Sulemana and Afriyie Barnieh should be starting ahead of Ayew brothers. agreed?

Some also believe that ex-Hearts of Oak Coach, Samuel Boadu would be proud of himself since he has been the backbone to the rise of Barnieh’s rise.

Imagine how proud Samuel Boadu would feel watching Afriyie Barnieh in the stadium.
He’s been central to the Barnieh’s remarkable rise since 2020.

However, another comment suggested that Ghanaians should not pressure the head Coach, Otoo Addo in starting Daniel Afriyie Barnieh who gave spectators an impressive performance.

Afriyie Barnieh will really be good back up for the team. I’m really excited with his play. I hope Ghanaians get the Patience not to pressure the Coach to start him. Tariq lamptey needs to up his game just a little. I’m very impressed with Dede Ayew so far. pic.twitter.com/VOVY54UoKJ

Afriyie Barnieh needs just 45 minutes at the world Cup and I bet you, Barcelona & Man United will start chasing him with £50m. Otto Addo should make this happen for Hearts of Oak to #CashOut#BlackStars | GHC 14.88 | MAX TV | Tariq Lamptey | Inaki Williams pic.twitter.com/qiCKjuMRYC

Daniel Afriyie Barnieh had the joint most shots on target vs Switzerland in the first half (1).

Another gem for the Black Stars 💎 pic.twitter.com/eWX46n9Nmn

Daniel Afriyie Barnieh has at least proving his worth in the Blacks Stars game against Switzerland.

Afriyie Barnieh has been substituted. A very good display from him. He has shown and proven to us that he can do it. He has made Ghana Premier proud. What a display 👏👏👏 pic.twitter.com/DmSC3nd9xm

If you watch Afriyie Barnieh play football, you might think Kai Havertz is a shoemaker.. Cameroon fight back to draw with Serbia Ace Ankomah now Fellow of Academy of Arts and Sciences – Mahama appeals for MoMo to fund NDC congress
14 mins ago

Mozambique ex-president’s son, others jailed for 12 years for corruption
30 mins ago