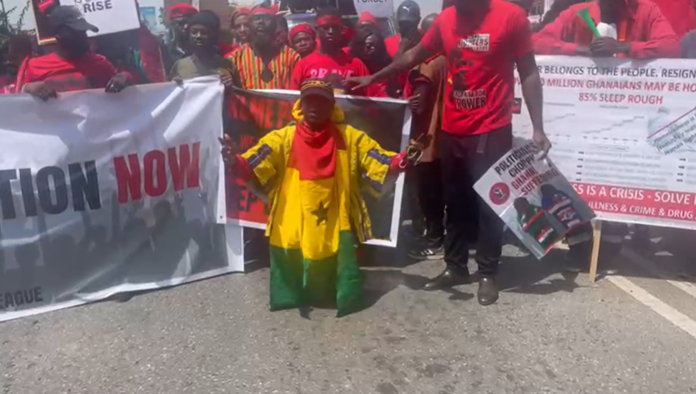 The ‘Kum me Preko’ demonstration is currently underway in Accra over the current economic hardship in the country.

The demonstrators say the move is aimed at pushing President Akufo-Addo to resign for his inability to alleviate the citizens from the prevailing hardship.

Speaking to GHOne TV, the Executive Director for ASEPA, Mensah Thompson stated that the President must follow the due process in the Constitution and resign honorably.

“He will have to resign because he doesn’t have a choice. On the 15th 16TH and 17th we have another three days of demonstrations coming on. Arise Ghana, we are putting over a million people on the street of Accra. We will see if the President will resign or not,” he told GHOne TV Evelyn Araba Aidoo who is covering the demonstration.

According to the ASEPA boss, the Kume me Preko demonstration held on Saturday November 5, 2022 is just a warning sign to the President.

“It is just a caution to the President that he must step aside. If he doesn’t resign, on the 15th 16TH and 17th he will hear from us and Ghanaians. We will see whether he will resign or not,” Mr. Thompson reiterated.

The demonstrators were holding placards with inscription such as Sika mpɛ mismanagement, Protect Journalists, impeach the President, Adinkra Symbol of failure, Boo the President, among others aimed at pressing on the President to resign.

Police Arrest Man Who Dresses Like A Woman and Steal From Male Clients(VIDEO). - Our mandate is to grow the private sector, economy – DBG Boss

No levies implemented on luxury vehicles by DVLA
16 mins ago