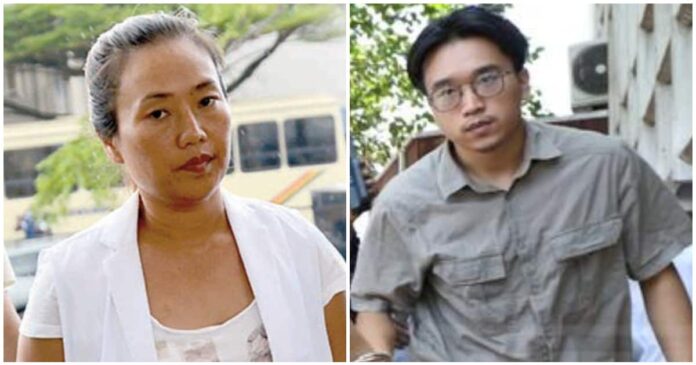 State prosecutors have preferred fresh charges against the son of galamsey kingpin Aisha Huang and two others for a total of eight counts including possession of ammunition and remaining in Ghana after the expiration of permit.

Huang Lei, (First Accused), son of the Chinese galamsey kingpin has pleaded not guilty to two charges. Huang Haihua, the (Second Accused person) who was charged with possession of a forged official document, also denied any wrongdoing whilst the (third accused person), Shi Yang, charged with four counts of possession of ammunition, pleaded not guilty to them.

All three have been remanded into prison custody.

In court on Wednesday, December 21, when the case was called, the prosecution led by Mercy Arthur, a Principal State Attorney, withdrew the previous charge sheet filed on November 21 and replaced it with a new one filed on December 20.

Their plea on the fresh charges were taken after the court presided over by Justice Lydia Osei Marfo had discharged them on the previous charge sheet and struck it out as withdrawn.

According to EIB Network’s Legal Affairs Correspondent, Murtala Inusah, the court while remanding the accused persons into prison custody said, the Chinese nationals are flight risk and the court is not convinced that when granted bail they would appear to stand trial.

Mercy Arthur told the court that, sometime in August 2022, the National Security Council Secretariat, the Ghana Immigration Service (GIS) and other security agencies received intelligence that the 1st and 2nd accused persons, Huang Lei and Huang Haihua, together with other foreign nationals had remained in the country without permits.

She said they were suspected to be engaged in illegal mining activities.

According to her, on September 2, 2022, a team of security officers visited the residence of the 1st and 2nd accused persons at Ahodwo, Kumasi, where they were arrested.

According to her, in December 2018, Aisha Huang was repatriated from Ghana on the directive of the Comptroller-General of the GIS, which directive is still in force.

She said the arresting team retrieved from the 1st accused person, Huang Lei, his Chinese passport with number E44932112 and affixed in his passport is a permit issued by the Director of Immigration with number EP-0082092 which authorized the first accused person to remain in Ghana until May 16, 2022.

She said the first accused person upon arrest and interrogation admitted he did not have a
valid permit to remain in Ghana.

According to Mercy Arthur, a search conducted in the room of the 1st accused person revealed among other things, eight (8), packs of Eley shotgun cartridges, containing about two hundred and fifty (250) pieces of ammunition. He was not able to provide a valid license for them.

According to her, the 2nd accused person, Huang Haihua, had in his possession a Chinese passport bearing his name with passport number EC4624083.

She said affixed in the said passport is what appears to be a Republic of Ghana Residence Permit with number RP0386869, purportedly issued by the Director of Immigration for a one-year period with effect from 26th May 2022.

She however, told the court that investigations disclosed that the supposed permit was not issued by or with the consent or authority of the Ghana Immigration Service. and based on further intelligence gathered, the team of security officers visited a property at Daban, Kumasi, on September 14, 2022, where the 3rd accused person, Shi Yang, together with others resided and were also arrested on suspicion of remaining in Ghana without the requisite permits as well as engaging in illegal mining operations.

Mercy Arthur said a Chinese passport with number E716840608 bearing the name and other particulars of the 3rd accused person was retrieved from him and affixed in the said passport is what appears to be a Republic of Ghana Residence Permit with number RP-0386576, purportedly issued by the Director of Immigration for a one-year period with effect from May 26, 2022.

Previous Coup attempt foiled in The Gambia
Next ‘Suspend your promise to build a cathedral, fix economy’ – Dormaahene to Akufo-Addo