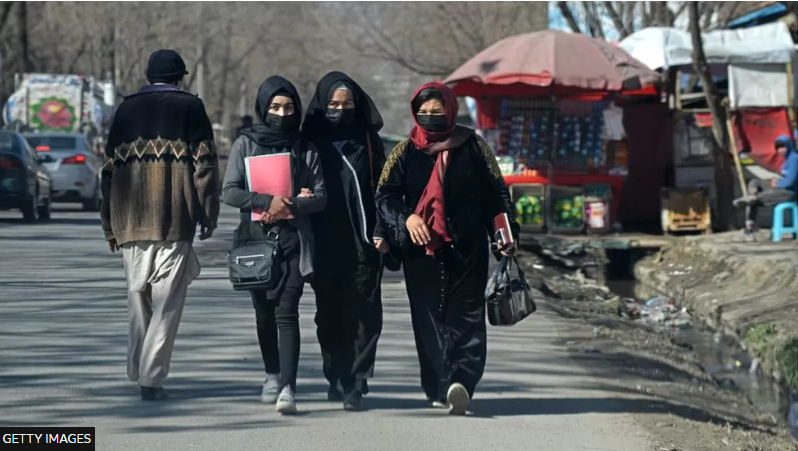 The Taliban has banned women from universities in Afghanistan, sparking international condemnation and despair among young people in the country.

The higher education minister made the announcement on Tuesday, saying it would take immediate effect.

The ban further restricts women’s education – girls have already been excluded from secondary schools since the Taliban returned last year.

In Kabul, female students have told the BBC about their anguish.

“They destroyed the only bridge that could connect me with my future,” one Kabul University student said.

“How can I react? I believed that I could study and change my future or bring the light to my life but they destroyed it.”

The US on Tuesday roundly condemned the Taliban’s actions “in the strongest terms” and said such a move “will come with consequences for the Taliban”.

“The Taliban cannot expect to be a legitimate member of the international community until they respect the rights of all in Afghanistan,” said Secretary of State Antony Blinken in a statement.

“No country can thrive when half of its population is held back.”

Western countries have demanded all year that the Taliban improve female education if they wish to be formally recognised as Afghanistan’s government.

The United Nations also said it was “deeply concerned”.

The Taliban’s leader Hibatullah Akhundzada and his inner circle have been against modern education – particularly for girls and women.

The Taliban had promised a softer rule after seizing power last year following the US’ withdrawal from the country. However the hardline Islamists have continued to roll back women’s rights and freedoms in the country.

The ban on tertiary education follows rules set last month, where women were banned from parks, gyms and public baths in the capital.

Just three months ago, the Taliban had allowed thousands of girls and women to sit university entrance exams in most provinces across the country.

But there were sweeping restrictions on the subjects they could apply for, with engineering, economics, veterinary science and agriculture blocked and journalism severely restricted.

Under Taliban rule, universities had already been operating under discriminatory rules for women – with gender segregated entrances to campuses and separate classrooms.

Female students could only be taught by women professors or old men.

One woman told the BBC about how there were “too many difficulties” just trying to continue her education after the Taliban takeover.

She said: “We fought with our brothers, with our fathers, with society and even with the government.

“We went through a hard situation just to be able to continue our education.

“At that time at least I was happy that I could graduate from university and achieve my dreams. But, now how can I convince myself?”

Afghanistan’s economy has been largely dependent on foreign aid in recent decades, but aid agencies have partly – and in some cases fully – withdrawn support to the education sector after the Taliban refused to allow girls into secondary schools.

There was an exodus of trained academics after the withdrawal of US-led forces, and this year many teaching staff have gone unpaid for months.

In March, the Taliban had promised to re-open some high schools for girls but then cancelled the move on the day they were due to return – citing funding and syllabus issues which rights groups said were excuses.