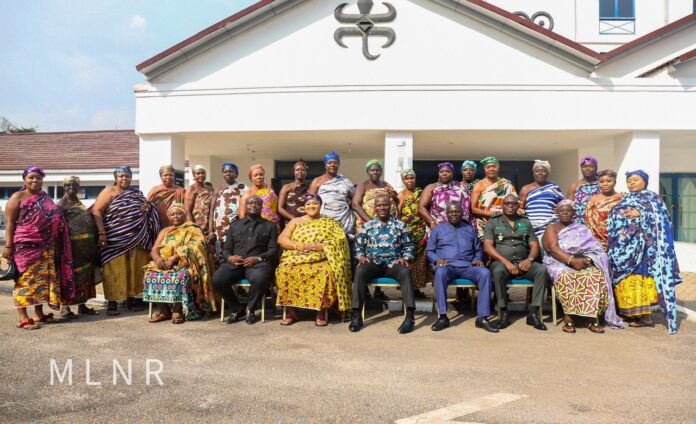 The Minister for Lands and Natural Resources, Samuel A. Jinapor on Tuesday, 20th December 2022 called on the Queen mothers of the Asanteman traditional council to assist the government in the fight against illegal mining in their various traditional areas.

He said the fight against illegal mining is a collective one and as such cannot be won without the efforts and support of important stakeholders like Queen mothers as he believes in the power women wields, particularly women with traditional authority, “If you want to conquer the world let the women lead and you will have the world under your feet,” he added

Speaking at a meeting with the Queen mothers in Kumasi on the sidelines of his one-day tour of the Ashanti Region, Hon. Jinapor said “I have been here to court the support of the Otumfo and the Chiefs of the Asanteman and it will be unacceptable on my part not to court your support because without you we cannot win this fight”

He bemoaned how troubling the wanton destruction of lands and natural resources of the country, particularly the river bodies have become rampant, and by this hearty remark employed the Queen mothers to mechanize ways that will help the government fight the destructive menace.

He reiterated the government’s stands on mining activities in general saying that government as I have always said is not against mining, we love our gold and other minerals and the jewelry we make out of them but what we are against is the illegal way of going about the act and is what we want you to help us fight against”.

The Lands and Natural Resources Minister assured the Queen mothers of the government’s support, adding that he will ensure the Minerals Commission provide them with needed resources to engage in the combat against illegal mining and also assured to engage them in the Green Ghana Project in the coming year.

The Queen mother of the Mampong, Traditional Area Nana Agyakuma Difie who spoke on behalf of the Queen assured the Minister of their support and rallied the other mothers to support the government to fight the menace as she indicated that if the Natural resources deteriorate it will go against them and their generations

He requested the minister to support the Queen mothers with all resources they may require to respond to their call of fighting against the menace.

The Queen mothers who were drawn from Bono, Ahafo, Bono East, and Adansi collectively thanked the lands Minister for the meeting and gave their comments to corroborate the plea made by the Mampong Queen mother on their behalf.

The meeting also among others discussed, the planting of Rosewood in large quantities and the effort of the government to partner with Queen mothers of the Asanteman Council to pilot the planting of bamboo and their active involvement in the 2023 Green Ghana Project.

Meanwhile, the Honorable Minister made a whistle stop at the Kumasi Zoo where he tasked the Forestry Commission to as a matter of urgency refurbish the Kumasi Zoo with a walkway, summer huts, and a facility to serve as staff changing rooms for workers.

Engaging the staff, he appreciated their efforts in keeping the Zoo running while encouraging them to keep up the good work and assured them that their challenges and welfare issues will be taken into active consideration.

Dr. Meyir Yiyele Ziekah, the Zoo Manager and Resident Veterinary Doctor at the Zoo thanked the minister for his visit and hoped that their challenges tabled before him will be addressed.

Previous Fifi Kwetey eloquent, has traction to cause major upset against the NPP – Dr. Kobby Mensah
Next MMDAs urged to work closely with security agencies to prevent crimes