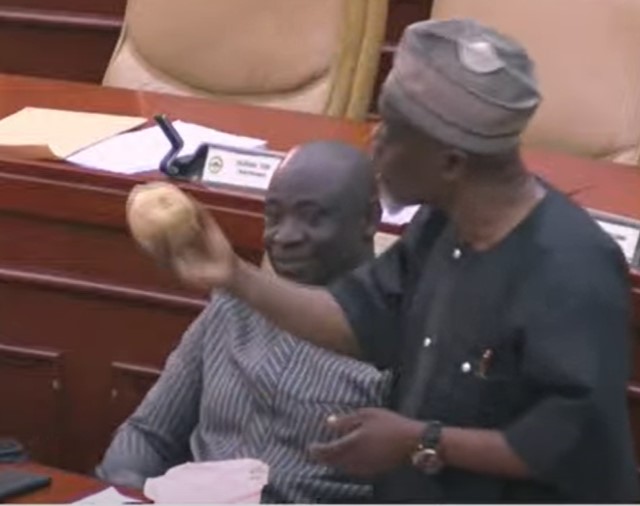 The Member of Parliament for Sagnarigu, A.B Fuseini on Monday carried a ball of kenkey and a piece of fish to Parliament House for a practical demonstration of the economic hardship Ghanaians face currently.

The lawmaker who was contributing to the debate of the government’s 2023 Budget, said the popular fish and kenkey enjoyed previously by both the rich and poor, is no longer affordable to the average Ghanaian due to the current hike in food prices.

“They say that the evidence of the sweetness of a pudding is not in its aroma but the actual eating. The real issues of the economy vis-à-vis the impact it has on the lives of our people is clear.

2023 budget debate: Food prices are over the roof due to insensitive government. – A.B.A Fuseini #JoyNews pic.twitter.com/w0eh04RIMr

“It is abundantly clear that through the vast incompetence of this government especially the economic management team and the Minister for Finance, this economy has been run into a ditch,” he said.

Meanwhile, the Finance Minister on Sunday, December 4 announced a debt restructuring programme to put the country’s debt level on a sustainable path.

Government is currently before the International Monetary Fund (IMF) to secure a programme to support its ailing economy.

Mr. Ofori-Atta said the Debt Exchange Programme is part of a key requirement for the government to obtain an economic programme from the International Monetary Fund.

Government in its 2023 Budget has also introduced some revenue measures to revive the economy and ease Ghanaians from the current difficulties.