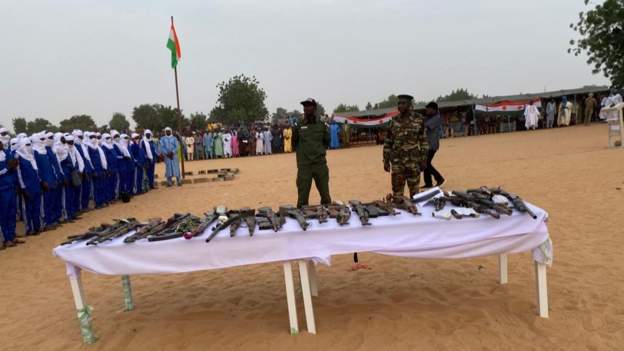 At least 86 gunmen have laid down arms and renounced violence in Niger’s south-western Tahoua region.

The region has been hit by armed gangs operating between Niger and northern Nigeria who carry out killings and kidnappings for ransom.

At a ceremony to receive them in the town of Bangui, some of the so-called repentant kidnappers said they resorted to criminality because they had no jobs but later realised violence was not an option.

They have called on the government to provide more job opportunities.

They were pardoned by the authorities following their surrender and are expected to be rehabilitated and given vocational skills.

This is one of President Mohammed Bazoum’s strategies to end the insecurity in Niger.

The ex-gunmen have promised to help the authorities tackle insecurity by trying to persuade other kidnappers to also surrender and embrace peace.

Dozens of guns belonging to the former gang members were displayed at the event on Monday evening.

Officials say talks with armed groups is key to ending the violence even as a military campaign continues.

Interior Minister Hamadou Adamou Souley said they hope the insecurity in Niger will be brought to an end “soon” given the progress being made.

Apart from increasing cases of kidnappings for ransom, Niger is also grappling with Boko Haram violence as well as other armed groups linked to the Islamic State (IS) and al-Qaeda.